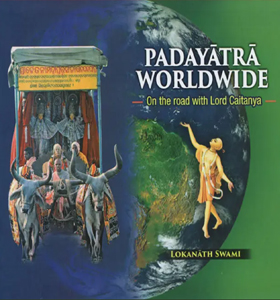 About five hundred years ago, Śri Caitanya Mahaprabhu predicted that His name would be chanted in every town and village of the world. Traveling on foot for almost six years, He inundated the Indian subcontinent with the mahamantra and established the superiority of kṛṣṇa-bhakti. Gaurāṅga traveled only in India, and to accomplish the phenomenal task of spreading the “great mantra for deliverance” to every nook and cranny of the planet, He sent His empowered senāpatī-bhakta – commander-in-chief and pure devotee – Śrīla Prabhupāda.

Buy this on Amazon : Padayatra Worldwide