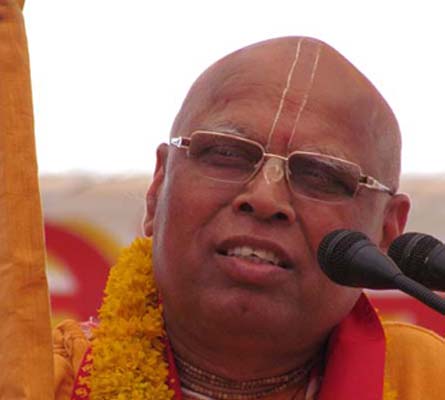 Born in the little village called Aravade, in the year 1949, H.H. Lokanath Swami Maharaj followed the principle of simple living and high thinking since his childhood days.  He then went to Bombay for his further studies but destiny had something else in store for him.  That was when the unseen merciful hands of Lord Krishna helped the determined young man to become one of Srila Prabhupada’s first Indian disciples.

In the year 1971, Srila Prabhupada was traveling to India with his foreign disciples, and they were holding a spiritual festival at Cross Maidan, Bombay.  That was when H.H. Lokanath Swami Maharaj’s dream to serve humanity became a reality.  He got the inspirational and transcendental chance to meet Srila Prabhupada and from that moment on his fate was sealed.  Further, he became an initiated disciple of Srila Prabhupada in 1972 and later sannayasa from Srila Prabhupada in December, 1975, at the age of 26.

‘Kumbha – The Festival of Immortality’, this book throws light on the significance of kumbha festival, its history and the opportunities this festival provides for preaching.

‘Back to Home (BTG Articles)’ is a compilation of articles written for Back to Godhead. Through these pages, reflect the areas of service and devotional projects of Maharaj.

‘My Prabhupada’ contains Back to Godhead articles written during Srila Prabhupada’s 108th birth anniversary (2004-2005), over thirty Vyasa puja offerings and six letters from Srila Prabhupada to His Holiness Lokanath Swami.

‘Festivals’ shows how the festivals at Mayapur and Vrndavana dham grew. How Srila Prabhupada developed them from scratch in the pioneering days, carefully nurturing them into glorious events.

‘Sanskrit Pronunciation book’ is a storehouse of knowledge for the devotees who want to understand the Vedic scriptures and spread the message of Caitanya Mahaprabhu.

‘In Conversation with Srila Prabhupada – Contexts and Contemplation’ contains the most cherished recollections of the conversational exchanges between His Holiness Lokanath Swami and Srila Prabhupada, Safely treasured in Maharaj’s memory, these intimate exchanges are now even better preserved and made accessible to all followers of Srila Prabhupada’s movement and undoubtedly, this masterpiece shall keep enlightening future generations too. These books are available in English, Hindi and Marathi also.

Adding to the list, this year’s most awaited publication, releasing very soon is Maharaj’s masterpiece ‘Vraja Mandal Darshan’ wherein Maharaj is making us see through his eyes and is also making us live and experience the exceptional Vraja Mandal Parikrama. It is not just a mere book but his feelings, experience, emotions, realization shared and most importantly, Darshan shared. 30 years of Parikrama packed in one book, this is something not to miss.