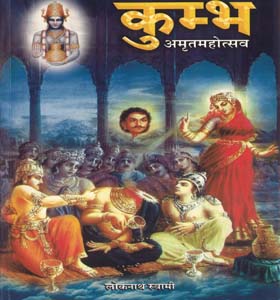 Kumbha, The Festival of Immortality is drawn from the Lord’s pastime of protecting the demigods from the demons by producing nectar from the ocean of milk. Lokanāth Swami captures the celebration of this Melā at Prayag, Nasik, Haridwar and Ujjain. It attracts millions of pilgrims who believe that bathing in the holy rivers at this auspicious time guarantees liberation from birth and death. Śrīla Prabhupāda attended the 1971 and 1977 festivals, with his disciples. The fighting between the devas and the asuras lasted for twelve earth years (twelve demigod days), Maha Kumbha-melās are held at each of these sites once every twelve years and ardha Kumbha-melās every six years. “On April 20, 2004 history was made at the Ujjain Kumbha-melā when the All India Sādhu Samāj officially accepted Lokanāth Swami as a mahanta representing ISKCON”